Electrical showers are very popular due to their many styles, easy installation, multiple wires, and water entry points; however, some electric showers may fail due to a fault in their wiring, like neutral wires.

So Why Did the Neutral Wire Burn Out in My Electric Shower?

The main reason that the wires could start a fire is the presence of flammable materials around them, and this also increases the possibility of someone getting burnt due to the flames coming out of the box.

How To Repair Burnt Neutral Wire In My Electric Shower?

Is It Safe To Put Tape On A Broken Charger? Here Is The Answer!

Can I Drink The Tap Water From A Bathroom? (Important Facts)

Does EMT Conduit Need To Be Grounded? Answered!

Can You Tie Grounds Together From Different Circuits?

What Can Cause Neutral Wire To Burn In General?

Many causes can lead to the neutral wire getting burnt other than water getting in the shower box, for example:

Arcing neutral wires results from loose connections; when neutral wires are loose, this leads to generating sparks. Sparks are dangerous even the very small ones can increase the heat of the wires, and when the heat of a wires rises, it melts the wires’ insulation. As a result, the wire will burn over time.

2). Neutral For More Than One Circuit

It’s recommended to use a neutral wire for each circuit because sharing a neutral for more than one circuit increases the load on the neutral wire. In addition, the neutral receives the current coming back from the device, so this way, it will be receiving currents from many sources, which will lead to rising the wire’s temperature.

When the wire’s temperature rises, this leads to the melting down of the wire’s insulation and later burning out of the wire, and since it’s one neutral for many circuits, this will affect multiple circuits, not only one.

Overloading is considered the main reason for wires burning out; when wires overload, their temperature increases, and then this causes their insulation to melt down and the wires to burn out. Unfortunately, people make a common mistake when overloading an electric circuit because they think the overload will only target the live wire.

The overload can hit all the circuits, including the neutral and hot wires; this also applies to the devices connected to the circuit; when devices and appliances get hit by an overload or power surge, they can get damaged.

When lightning strikes hit an electric circuit, they lead to injecting the circuit with a huge amount of power; this causes the circuit to overload and directly increases the temperature of the wires, such as neutral and hot wires. When the wires’ temperature rises, the wires’ insulation will melt down, and wires get burned.

Other Reasons for Neutral Wires Getting Burned 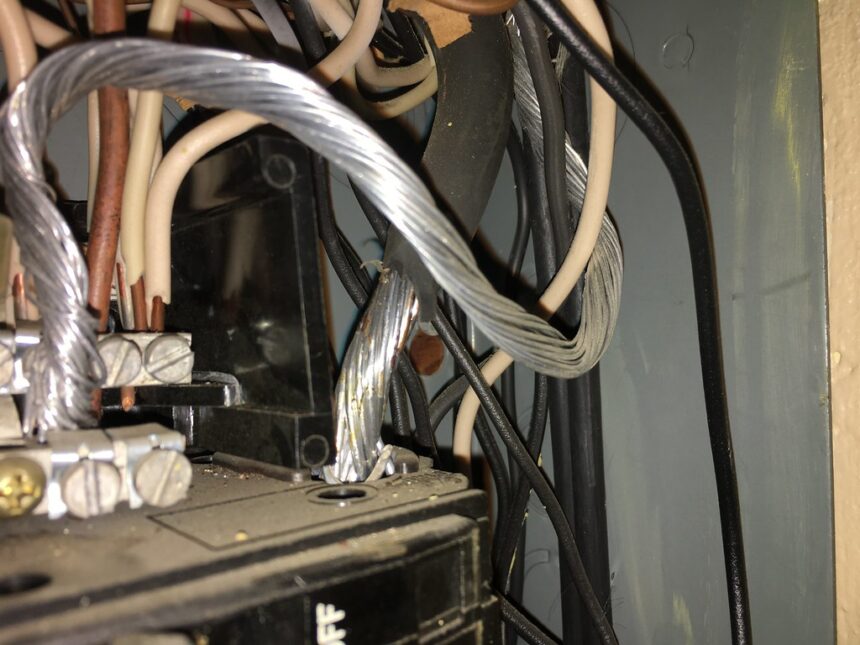 How To Avoid Neutral Wires Getting Burned?

To avoid neutral wires getting burned, you use several methods such as securing all the connections, making sure wires don’t coil, using short wires instead of long ones, avoiding overloading the circuit, and many more methods:

1). Securing All The Connections

When a breaker trips down, you have a problem in your circuit, and you have to fix it as soon as possible. Breaker trip due to wires overheating which usually happens due to loose connections. If you couldn’t find the loose connections yourself, it’s recommended to hire a professional electrician.

Wires size or AWG is very important when installing an electric circuit; you must choose the right size or AWG suitable for the circuit’s load because increasing the load on the circuit wires by choosing a smaller size than recommended can lead to melting down of the wire and getting it burnt out.

When wires get coiled, the magnetic field around them increases, which leads to increasing the temperature of the wires due to the heat generated from the magnetic fields. As a result, the wires’ insulation will soften, and then they will meltdown over time.

Before installing any electric circuit, calculate the total amperage needed by the appliances and devices connected to the circuit. Therefore, you can install suitable wires and avoid overloading them with more current than they were designed to carry.

You can touch insulated wires to check for their temperature; if you find any wire hotter than usual, you should consult a qualified electrician and ask them to locate what is causing the problem, like loose connections or bad wiring.

How To Fix A Burnt Neutral Wire?

Wires could start fires due to flammable materials around the box or the wires, which increases the possibility of starting flames and burning anyone close to the box. To fix a burnt wire in an electrical shower box, you can follow two main steps:

However, there are many reasons other than water getting in the shower box that can lead to the neutral wire getting burnt out; for example:

Neutral wires are very important to electric circuits. They play the most important role after hot wires by returning the current to its source; any problems concerning them should be dealt with carefully and quickly.