Many people think that ovens, washing machines, and heathers use sockets and plugs to connect to the current, but that’s not true. Although some of them do, the majority of these appliances use a fused spur to connect to the key circuit of the house, creating their own individual circuit.

Some estate regulations establish that appliances should be connected to a fused spur. This converts them into the main electrical connection seen in any kitchen, washing room, or bathroom in any American house, with the purpose of protecting the house’s main electrical system.

How Many Sockets Can Come Off A Fused Spur?

You can connect more than one socket from a fused spur, but experts in the electrical field don’t recommend this practice due to dangerous risks. It’s recommended that only one socket comes off a fused spur to avoid overloading the cables, overheating, or even an overcurrent.

The fused spur separates and isolates a branch of electricity, creating a new separate circuit to allow an electrical device or appliance to turn on and off without connecting them to the main house’s electrical current. Still, it has a maximum capacity that shouldn’t be exceeded.

Connecting more than just one socket to a fused spur could overload the cables because the maximum capacity of the current, usually 13 Amp, was exceeded. And, the overload, aside from damaging and overheating the electrical devices, could cause an overcurrent, leading to an electrical fire.

Can I run two sockets off a fused spur?

So even if you add more than one socket, the moment you connect an electrical device of high current to it, it won’t let you use more electrical devices or appliances because there won’t be enough current for them, and there could also be a risk of overloading.

For example, if you have a fused spur of 13 Amp, you can add more than one socket to the entire circuit, but the maximum capacity of all the sockets will still be 13 Amp. Then, if you connect your washing machine, you probably won’t have enough energy left for other electrical devices to function.

Can You Run A Spur Off A Spur?

Running a spur off a spur is not recommended because connecting it could lead to a possible overload. Doing it could easily exceed the maximum current capacity for the cable coming from the second spur. All the charges should be reasonably balanced across the ring to prevent overloads from happening.

How To Add A Spur On A Main Electrical Circuit?

But not all sockets serve this purpose, and a fused spur can’t be connected to any socket. To add a fused spur, you need to find the right socket. Check if the socket you want to spur off is connected to the ring circuit and that only has two cables. If it has one or three cables, you can’t connect a spur.

What’s A Fused Spur Used For?

A fused spur allows any electrical device to operate on a different current circuit from the original current, creating a branch or a “spur” from the main electrical circuit, also called a ring circuit. So a fused spur is the best option to use with appliances that manage high voltage.

Connecting all these electrical devices or appliances to a different cable outside the main current will protect your house’s main electrical system from overloading and possible electrical fires. That’s why they are used often by professional electricians to use inside a house.

Between the appliances or electrical devices that should be connected to a fused spur are the thermostat, dishwasher, washing machine, heater, boiler, refrigerator, and oven. But other electric devices that aren’t usually inside the house, like a water pump, can also be connected.

What’s The Difference Between A Fuse And A Circuit Breaker?

Fused spurs are always labeled and compared with circuit breakers due to how similar they are. And although their purpose is the same, of automatically interrupting the source of power or current to an electrical device, appliance, or area after an overcurrent event, they have some fundamental differences.

After a current overload or short circuit, a circuit breaker can be reset manually after interrupting the event. Then, circuit breakers have a longer lifespan, unlike fuses that can only be used once and must be replaced after having interrupted an overcurrent event.

What’s The Difference Between Overcurrent, Overload, And Short Circuit?

Managing an electrical current in the domestic or industrial area has to be handled seriously. But, even with significant experience in the electrical field, there are always risks of overcurrents, overloads, and short circuits when handling an electrical circuit.

What Types Of Fused Spur Exist?

There are two main fused spurs, the switched fused spur, and the non-switched or unswitched fused spur. Other variations exist from these types, like the single-pole, the double pole, and a fused spur with a timer. But the best-fused spur option for you will vary depending on each case and the intended use. 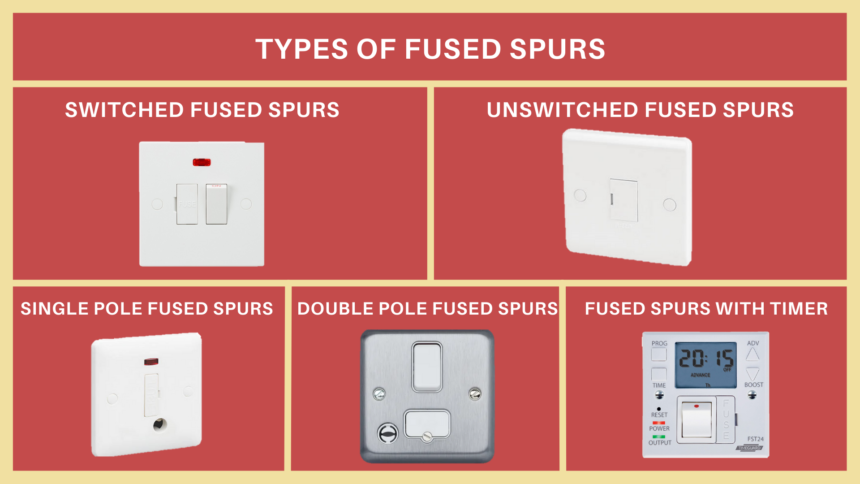 Does A Spur Need To Be Fused?

The main purpose of a fused spur is to isolate appliances that use high voltage for security purposes. So, according to state and regional regulations and laws, all appliances need to be fused for this purpose, being the best way to do it with a fused spur.

The reason behind these laws and regulations regarding fused spur for appliances comes from emergency scenarios that could happen. In case there’s an emergency, a fire, an earthquake, or any other emergency, you will be able to turn off any appliance without touching it directly.

The fused spurs are electrical switches that are wired between the ring circuit and an appliance, and they protect the main house electrical system by isolating that appliance that uses a high current from the rest of electrical devices and other appliances.

Any appliance wired to a fused spur won’t need to use a plug or socket to connect to the current because it will be directly connected. The fused spur will work as the main power switch for that appliance, with a current circuit of its own domain so that it can be manually turned on and off.

Hi there! My name is Giovanna, and I’m a Med Student from Venezuela. My not-so-hidden passion for writing and research led me to start working as a freelancer in 2016, and it’s been quite an exciting journey ever since. Speaking three languages (Spanish, English, and Italian) also contributed a lot by opening many doors for me in this field. I love to write my articles the way I would love to read them, engaging, full of interesting facts about the topic, and easy to follow, making them valuable for many people. I like my job as a freelancer because I get to try and learn new skills with each new job, so I’m always excited to start new projects and for what’s next.